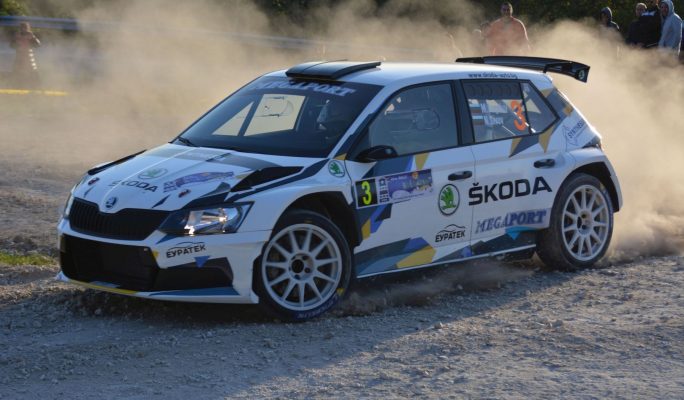 Miroslav Angelov is very close to the title

With a new leader ended the second day of the 49th Edition of the rally “Bulgaria”. Miroslav Angelov and co-driver Nedyalko Sivov (Skoda Fabia R5) won 3 of 6 stages and now they lead the competition. The crew of “Megaport” was the quickest in stages “Kozichino, Aladzha monastery 2”, and “Avren 1”.

On second place in the end of the day is the team of Dimitar iliev and Krum Donchev (Mitsubishi Lancer Evo 9). They won the final stage – the second crossing of the “Avren” as behind the 39.3 seconds of the leaders in the race.

Third in the rankings is the crew of the „Bultrans Rally Team” – Hristo Atanasov and Martin Ivanov (Citroen C2 R2), which lost 4:35.8 minutes from leaders. Last year’s champion Tihomir Stratiev and co-driver Dobrin Borisov (Peugeot 208 R2) move to fourth position as they are lagging behind with 05:08.5 minutes.

The leaders of day 1 – Yordan Atanasov and Nedyalko Nedyalkov (Mitsubishi Lancer Evo 9), have won the first two stages of the day – „Аladzha monastery 1” and „Dyulino”, but dropped off in the fourth stage because of a failure in the gearbox.