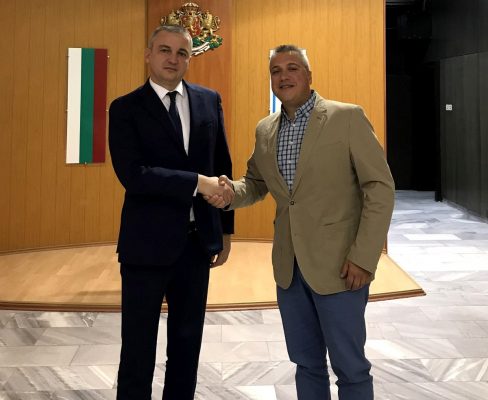 Two days before the start of Rally Bulgaria 2018, Varna is waiting the participants of the 49th edition of the most prestigious automotive race in our country. This weeкend the Black sea capital will be also motorsport capital, hosting Rally Bulgaria, as well as the final round of the Bulgarian drift championship. Both competitions will have joint start ceremony in Friday in the city’s port.

On an official meeting between the mayor of Varna Mr. Ivan Portnih (on the left in the picture above) and Director of rally Bulgaria, Mr Alexander Kovatchev (right of the picture), the mayor of our sea capital confirmed the commitment of the municipality for the support to the rally Bulgaria “.

Mr. Portnih called on residents and guests of the city to support their favorite racers on the rally. They bothl were unanimous that the security of the event – as that of spectators and participants is an essential priority in the three racing days.

Mr. Portnih recalled that Varna has a long and glorious history, associated with motorsport competition at home and the sport as a whole, as in the city are not born a Bulgarian champions. The Mayor of the seaside town will be pleased to attend the official ceremony and some of the gears and invited his fellow citizens also were on the show and to comply with the instructions of the organizers in order to obtain a wonderful race.