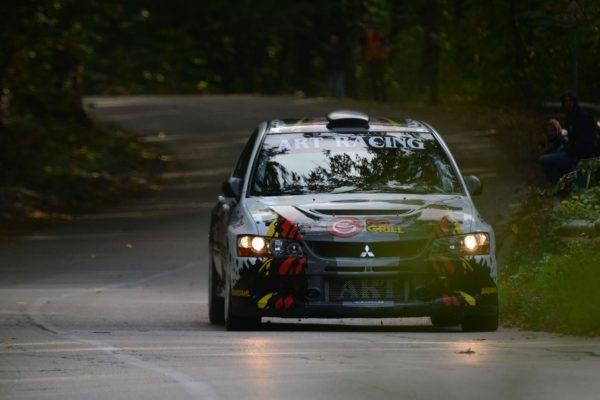 The first special stages on Saturday morning turned out to be a dificult hurdle to crews in 49-th Edition of rally „Bulgaria”. And its only the half of the racing day.

The champions for 2015 – Georgi Vasilev and Stefan Dobrev (Mitsubishi Lancer Evo IX) received front differential failure at „Aladzha monastery” and dropped off for the day, while the engine of the favorites in the group E Kalin Benchev and Alexander Spirov (Subaru Impreza) block of the next stage – „Dyulino” and made the end of their race.

The longest stage in this year’s rally „Bulgaria” crushed the ambitions of Tihomir Stratiev and Dobrin Borisov (Peugeot 208 R2). The champions for 2017 finished „Dyulino” two minutes behind the leaders and now they in very difficult position. The leaders in the national championship Miroslav Angelov and Eddie Sivov (Skoda Fabia R5) are third after both saturday routes and will not risk the finish.

Yordan Atanasov and Yanaki Yanakiev (Mitsubishi Lancer Evo IX) lead the race after winning both SS2 and SS3 today. Their only serious rivals were Dimitar Iliev and Krum Donchev (Mitsubshi Lancer Evo IX), but the lack of experience with the new format of the rally „Bulgaria” and the years without races telled their word, and the veterans are second, 22.7 seconds behind the leaders.